Astros’ disappointing road trip highlights their weaknesses as a team

Astros' struggles on the road continue 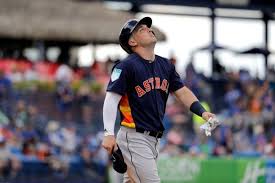 On a warm, polluted Sunday night in LA, the Astros, after 9 innings of only scoring once off of a George Springer solo homer to center, fell to the Dodgers, a final score of 8-1. This loss capped off a miserable road trip for the Astros, one which they lost 9 out of the 11 games they played between the Angels, Athletics, and Dodgers. Throughout this tenure of underperforming, several issues became glaringly obvious with this team that it even became hard for their veteran 71 year old manager Dusty Baker to ignore.

On the pitching side, their bullpen was not good. The combined total of runs given up in the series against the Angels alone was a staggering 44 runs in 5 games, which crushed every chance they had at securing a W in the books. This Angels team had been struggling coming into this trip, with a record of 9-22 after a home loss to the Astros, and they put a pounding on the Astros to sweep them in Anaheim in a 5-game series.

Offensively, the team was solid. They put up 30 runs in the five game stretch, and had the lead multiple times throughout the series, often one with 2 or more runs. Kyle Tucker, Michael Brantley, and George Springer all had a good series offensively in Anaheim, but at the end of the day, without a secure bullpen and rotation to lock it down, it’s almost impossible to win against the slugging Angels lineup.